Plants vs. Zombies is a 2009 tower defense video game developed and published by PopCap Games. First released for Windows and Mac OS X, the game has since been ported to consoles, handhelds, and mobile devices.

In the game, the player takes the role of a homeowner in the midst of a zombie apocalypse. As a horde of zombies approaches along several parallel lanes, the player must defend the home by putting down plants, which fire projectiles at the zombies or otherwise detrimentally affect them. The player collects a currency called “sun” to buy plants. If a zombie makes it to the house on any lane, the level will be failed and the player will have to restart it.

The game was designed by George Fan, who conceptualized it as a more defense-oriented sequel to his fish simulator game Insaniquarium, then developed it into a tower defense game featuring plants fighting against zombies. The game also took inspiration from Magic the Gathering, Warcraft III, and Swiss Family Robinson. The game took three and half years to make. Rich Werner was the game’s main artist, Tod Semple programmed the game, and Laura Shigihara composed the game’s music. In order to appeal to casual and hardcore gamers, the tutorial was designed to be simple and spread throughout the game.

Plants vs. Zombies received critical acclaim and was nominated for multiple awards, including “Download Game of the Year” and “Strategy Game of the Year” as part of Golden Joystick Awards 2010. Reviewers praised the game’s humorous art style and simplistic but engaging gameplay. At release in May 2009, it was the fastest-selling video game developed by PopCap Games and by 2010 had sold over a million copies worldwide. A few years after the release of Plants vs. Zombies, PopCap Games was bought by Electronic Arts (EA). The company laid off Fan and 49 other employees, marking a change of focus to mobile and social gaming. After the buyout, Plants vs. Zombies was followed by a series of follow-ups; including two direct sequels, three third-person shooters, and two spin-offs, most of which have received positive reviews. 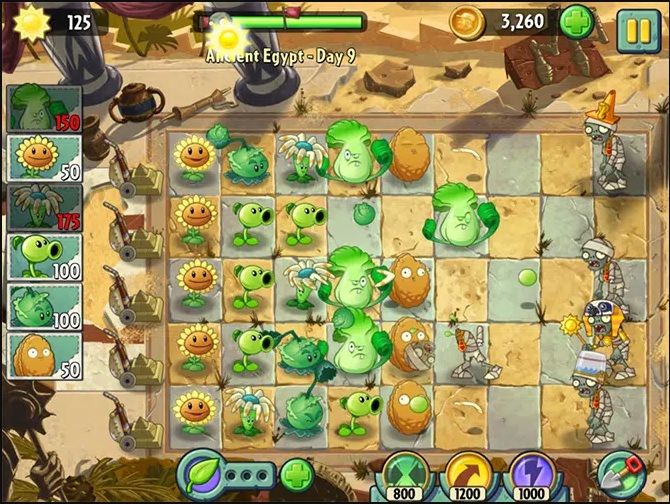 Plants vs. Zombies is a tower defense video game in which the player defends a house from zombies. The lawn is divided into a grid, with the player’s house to the left. The player places different types of plants on individual squares of the grid. Each plant has a different style of defense, such as shooting, exploding, and blocking. Different types of zombies have their own special behaviors and their own weaknesses to different plants. For example, Balloon Zombie can float over the player’s plants, but its balloon can be popped by Cactus or the zombie can be blown away by Blover. Other examples of zombies include Dancing Zombie which summons Backup Dancers around himself; and the Dolphin Rider Zombie, which rides on a dolphin to jump over a plant.

The player can only pick a limited number of types of plants through seed packets at the beginning of each level, and must pay to place them using a currency called “sun”. The player gathers sun by either clicking on the sun that randomly generate over the lawn, or by using certain plants that generate sun, like Sunflowers and Sunshrooms. Each type of plant recharges between each placement of the plant at various speeds. If the player wants to remove a plant, they can dig it up using a shovel. When a zombie reaches the left edge of a lane, the lane’s Lawnmower will kill all the zombies in that lane and is depleted after one use; if another zombie reaches the end of that lane, the player has to restart the level.
<---Nội dung đã được ẩn--->
Bạn cần nhấn Like để xem nội dung này !!!
<---Nội dung đã được ẩn--->
Link xem Youtube: https://youtube.com/watch?v=RmXB07gB-pc
Sửa lần cuối: nghiammo 06/02/2022 14:00
Diễn đàn chia sẻ kiến thức máy tính:
KETNOI123.COM