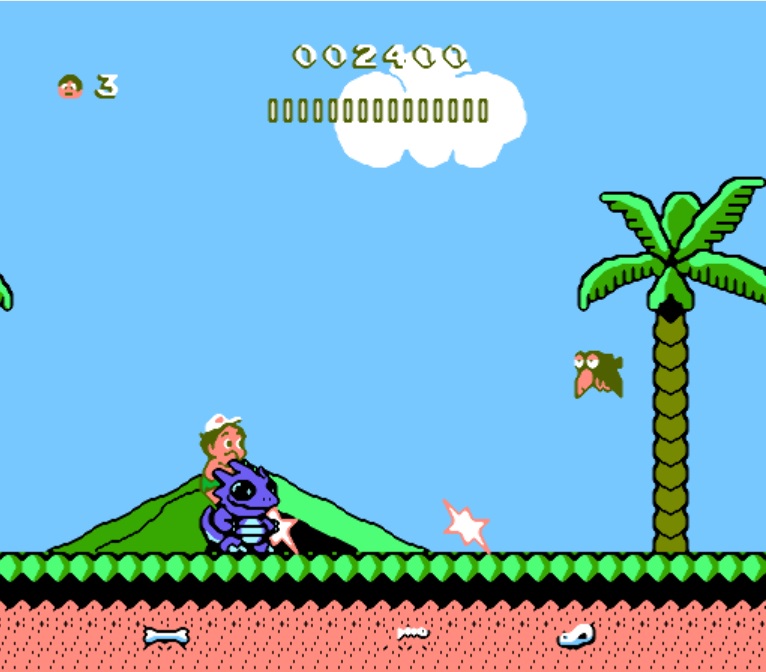 The rules of the game are the same as those in the original Adventure Island, with

The rules of the game are the same as those in the original Adventure Island, with the main new feature being the addition of an inventory system. Before the player begins a stage, he can choose which of Higgins’ animal friends to bring (if he has rescued any), as well as whether or not he should bring one of the stone hammers he has accumulated. Because of this, the player can no longer upgrade to shooting fireballs when he picks a second hammer. Instead, it gets added as a reserved hammer to the player’s inventory.

The checkpoint system has been eliminated and if the player dies in the middle of a stage, he must restart from the very beginning. However, the stages are significantly shorter than in the previous game. When the player strikes a place where a hidden egg is located, it will play a different noise that will serve as an indicator of its location. The bonus zones are now accessed by picking up a key located inside these hidden eggs. Some of these keys will also transport the player to an item room or a shortcut to the next island. There are now underwater stages, as well as vertical-scrolling stages. When the player completes a stage riding a skateboard, he does not get to take it to the next stage like he could in the previous game. When the player completes a stage, he will be asked to choose one of ten spinning eggs that will give him a certain number of points. The player can now backtrack during a stage as well, but only up to a certain point.

The boss of each island awaits the player on a specific stage at the beginning. However, if the player is defeated while fighting a boss, the boss will move to another area, forcing the player not only to clear his current stage, but also another one in order to fight the boss.

There are four types of dinosaur friends that Higgins can ride. These animal friends are summoned when the player collects a playing card suit hidden inside an egg. The blue camptosaurus (summoned by a heart card) attacks with his tail and can walk on ice without sliding; the red camptosaurus (spade) can breathe fire and swim over lava until a certain point; the pteranodon (clover) can fly over obstacles and drop stones; and the elasmosaurus (diamond) is the only dinosaur that can survive in underwater stages (the others will be lost when used underwater) and can help Higgins swim faster.